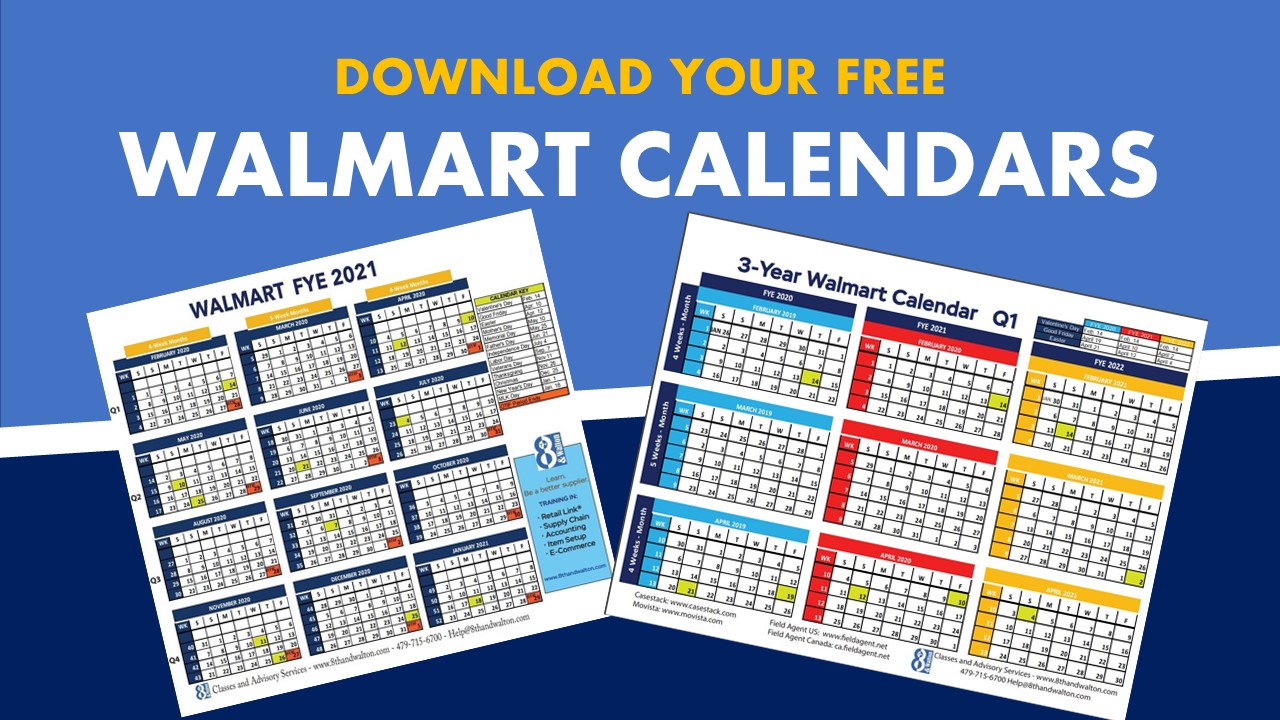 Understanding the Walmart week and the Walmart Fiscal Calendar is important for a couple of reasons:

If you’re new to working with Walmart or need a refresher, here’s a quick run-down of how Walmart breaks down the year — and why.

What Is a Walmart Week?

A Walmart week begins on Saturday at 12:01 a.m. and ends on Friday at midnight. Walmart weeks are the building blocks to Walmart’s fiscal year calendar.

What Is the Walmart Fiscal Year Calendar?

Understanding the Walmart weeks will help you understand the Walmart supplier calendar. The Walmart year begins in February, so Q1 for Walmart is February, March, and April.

Not any old February, March, and April, though. Walmart uses a 4-5-4 calendar, which means that February has four weeks, March has five, and April has four. This 4-5-4 pattern is repeated for each quarter of the year.

These little quirks mean that the Walmart calendar will rarely match the calendar on your wall at home, but it also means that each quarter contains three months and 13 weeks: a 4 week month, a 5 week month, and another 4 week month. This allows for a more accurate report of sales.

How Does Walmart Get 53 Weeks in a Year?

The earth’s year, the time it takes the earth to travel around the sun, is about 365.242199 days (at the moment). We’ve never come up with a perfect way to divide the year, so calendars usually start off just fine, and then pretty soon they’re celebrating the Winter Solstice in July. The standard solution for that is Leap Year — we tack an extra day onto February every four years.

Walmart does the same, adding an extra week every seven years so that there is a 53-week year to catch everyone up and avoid having the Walmart December in spring.

This can be a lot to keep straight. Fortunately, you don’t have to memorize the Walmart year — though most suppliers do get used to it after a while.

What Is a Fiscal Year Anyway?

Businesses establish their reporting based on a fiscal year. A fiscal year is the 12-month period selected by the business to be its annual accounting period. Specifically, it is the time a business completes a full accounting cycle from journal entries to year-end financial statements.

The “period selected by the business” is important. As long as the period of time is a consecutive 12 months, it doesn’t have to begin on January 1. The business can begin its fiscal year well past the beginning of the calendar year.

Why Start a Fiscal Year After Jan. 1?

Many businesses begin their fiscal year in February. The biggest reason for this move is the busy holiday shopping season for retailers. With the increased transactions during December and January, it would be complicated for a retailer to prepare its year-end financial statements and file its corporate income tax returns at this time.

Those January transactions are an important factor as they account for a spike in returned merchandise. No retailer wants holiday merchandise purchased in one fiscal year to be returned in the next fiscal year. It would be a devastating (and skewed) beginning to the following year’s numbers. With the fiscal year starting later, the numbers reflect more accurately.

Keeping Up with Walmart News Each Week

Join 150,000+ suppliers who receive the most important news headlines in retail. Headlines can be delivered daily or weekly straight to your inbox. Subscribe here.