In every new initiative Walmart develops, one goal remains at the core: commitment to the customer. That commitment goes far beyond low prices and customer service. It’s a promise reaching as local as the community, but as big as the world.

Walmart renewed its focus on the environment for its latest initiative. The company sees its responsibility to lead the way in preserving natural resources for future generations. In an effort to partner with suppliers in improving processes to protect the earth, Walmart launched Project Gigaton.

What Is Project Gigaton?

To explain the origin and goal of this initiative, Laura Phillips, SVP of Walmart Sustainability, was a guest on Focus on Suppliers.  She explained that earlier this year at Walmart’s Sustainability Milestone Meeting, Project Gigaton was announced as a plan to reduce environmental impact through Walmart’s supply chain.

Why Is this Initiative Important for Suppliers?

The average company supplying to Walmart may appreciate the effort being made in Project Gigaton. Walmart is a global presence and certainly has a responsibility to give back considering its footprint. But what is the personal interest for the supplier?

The interest in getting behind the initiative from the supplier perspective lies in the numbers for supply chain. With the day-to-day activity of doing business, suppliers may not always think in terms of natural resources, but experts measure the long-term impact.

For example, today’s supply chain is one of the largest contributors to greenhouse gas emissions; by the latest measurements, over 60 percent can be traced back to supply chain. Water is also a consideration. Supply chain claims 80 percent responsibility for use of water.

We can’t talk about natural resources without mentioning the tropical rain forests. In the category of deforestation, supply chain also plays a huge part. Supply chain is currently responsible for almost 70 percent of tropical deforestation.

Walmart recognizes supply chain’s impact on the environment. That’s why Project Gigaton is not a lone Walmart initiative, but a partnership with its suppliers to make a positive change. Many businesses, large or small, all doing their part will have a powerful influence on the future.

As a supplier, partnering with Walmart on Project Gigaton is not as cumbersome as it sounds. No matter what area of retail you work, there are many ways to reduce emissions within your own scope of influence. Phillips says there are different ways suppliers can participate in Project Gigaton. Many suppliers took action early and made amazing new commitments to the environment.

“We’ve had many suppliers make new commitments about areas of work they’re going to do toward the gigaton of reduction,” she explains. “Things like food waste, packaging, sustainable agriculture, fertilizer, and animal agriculture. We’ve even renewed commitments in areas like efficient energy products.”

Walmart is not just encouraging suppliers to get involved. The company wants to help the 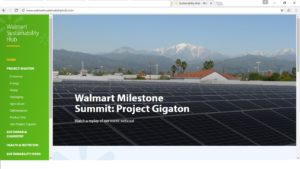 “We’ve designed new toolkits for suppliers,” Phillips says. “Whether they’re already leaders in the initiative or just getting started, suppliers can work in different areas in Project Gigaton. They simply sign up alongside Walmart to do the work together in the supply chain.”

One quick click to the Walmart Sustainability Hub gives a supplier tangible goals to reduce emissions. For example, in the areas of Packaging, Walmart lays out ideas of:

The Walmart Sustainability Hub provides the supplier with an array of ideas, goals, and reporting tools to partner with Walmart on the emissions reduction process.

Retailers and Suppliers Taking the Lead

It’s easy to see Walmart has taken a leadership approach to helping the environment. It’s not just the right thing for the company to do, but the necessary thing. Partnering with suppliers and giving them the tools for success does more than own up to retail responsibility due to supply chain; it fills a much-needed void in terms of leading the way to preserving the environment.

Analysts and critics alike point to a common denominator for retailers taking more of a lead in environmental safety and preservation: the lack of government priority. When political leaders pull back on federal climate action, public sentiment doesn’t change. Businesses are finding favor and loyalty among shoppers in tune with their environmental efforts. Environmentally-conscious shoppers are even willing to pay more for non-branded products that are natural, organic, and sustainable.

Retailers and suppliers leading the way to positive change is a win for the environment, and in turn, a win at the shelf. As consumers look for improvements in the issues they feel passionate about, retail can help meet their expectations where they shop.

Project Gigaton is a large initiative, but with a large payoff for the environment. Phillips concluded her visit by touching on accountability. Using the online resources will not only support suppliers, but show how they and Walmart are achieving the goal.

“We’ll use the Walmart Sustainability Hub to share information and commitments,” she explains. “We’re also launching a metrics and measurements program very similar to the Sustainability Index that suppliers use today. We’ll be working together to monitor our progress over the next several years.

“All of these activities together, when we do them well, will add up to a gigaton of emissions reduction. It’s great for the environment, it’s great for our customers, and it saves money in our business.”